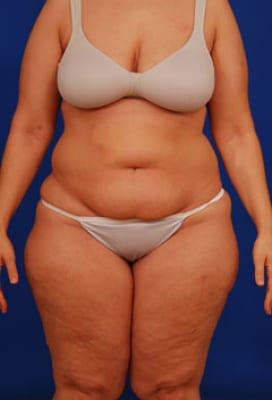 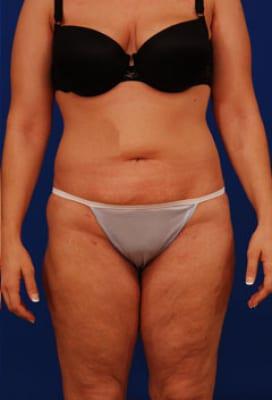 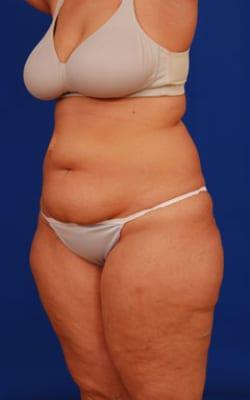 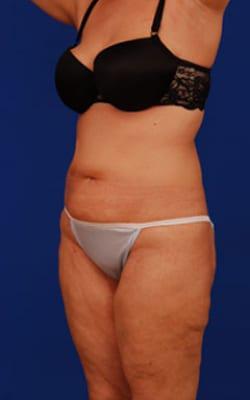 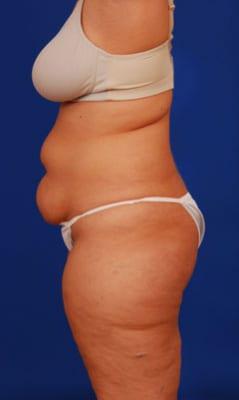 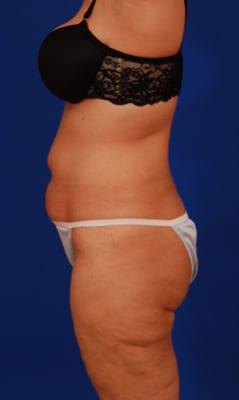 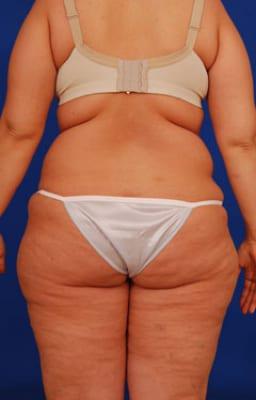 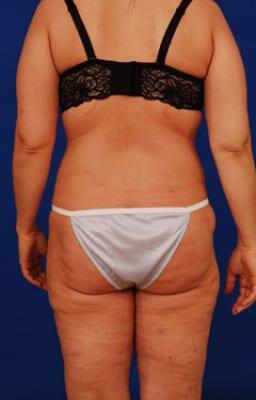 This is a 5’6″, 198 pound woman was interested in body contouring liposuction. Her area of primary concern was her knees, and her goal was to get into a pair of jeans that fit well with a pair of boots.

She had lost weight prior to visiting me in the office. She presented with some “issues” that we addressed during her consultation. After much consideration about her goals and expectations as well as her history and psychiatric issues, I felt that she was a reasonable candidate for a first stage liposuction. Although there were many complex issues that we had to deal with, I felt that she was mature, reasonable and motivated and as such I felt that there was an opportunity to have a very positive impact, while keeping her safe. Most of my consultation time in almost all discussions involves a thorough psychiatric and medical evaluation. Counseling and education is the name of the game. Even with significant weight loss, she has true lipodystrophy of her hips and lower extremities that will remain large relative to the rest of her figure.

She is seen here after a liposuction of about 10,900cc of fat. This took about two hours (speed is important in these cases). She is now five months out from her surgery. Her weight is 166 pounds, she can wear normal jeans (she was a size 20 and is now a 9). She really enjoys that her knees are now much more normal in size. On the day of her photos she described to me how much easier it is to control and improve her weight by eating far less and getting more exercise. She told me that she was also dating now and you can tell this really excited her – she says she now has the confidence that she didn’t have before.

This is a large volume liposuction and should only be performed by experts. This is not a procedure for SMART LIPO or any other “gimmick” type liposuction. The recovery from this procedure is real, and I expect patients to get up and about in order to prevent complications. Taking off the garment while standing quickly is the surest way for a patient to learn what it’s like to faint. For the first week you need to take it easy. Please read my Liposuction Literature to learn all about liposuction.

It’s also important to note that her skin has irregularities. She had an enormous amount of cellulite and irregularities before the procedure – she will certainly have them afterwards as well. Even with this large fat reduction her skin does not hang as some people believe occurs. This skin in most patients actually retracts quite well albeit imperfectly. This can set the stage for a second procedure like a skin tuck, tummy tuck, arm or thigh lift. Better yet for some patients, is that they don’t need any additional procedures, their goals have been met, and they are pleased with the improvement.