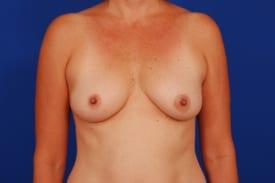 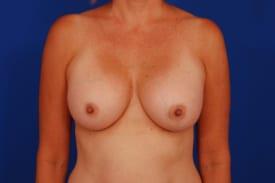 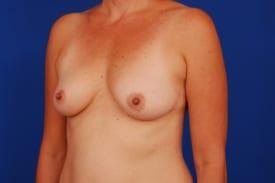 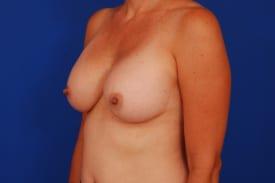 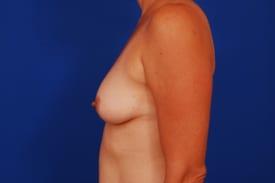 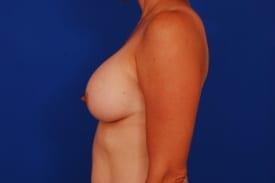 This is a 44 year old mother of three who is 5’6″ and 134 pounds. She has three children. She was interested in a breast enhancement. Her right breast was larger and more saggy than the left side.

We discussed her alternatives at length. I told her about the benefits of a “lifting” procedure with scars, as well as breast augmentation benefits alone (and the difference between implants above and below the muscle). An implant placed above the muscle (subglandular) can be “set” down low, which will lift the nipple-areola complex more, but at the expense of an implant that tends to contract more, be more visible and be less supported by the muscle. A submuscular implant will contract less, behave better and be more natural. It could, however, sit up a bit higher, resulting in looser tissue on the bottom of the breast.

She elected for submuscular implants with the option that she can always have a lift later on if she wishes. She is seen here after 325cc silicone augmentation. The implants are placed below the muscle that is not cut at the bottom of the breast. I’m not a big fan of cutting the muscle because it will actually move higher on the chest and will no longer be useful to “hold up” the weight of the breast implant.

These photos are eight months after her procedure. Her breasts are attractive with much greater superior breast fullness. There is some loose tissue on the bottom of her breasts, but this is minor. She essentially has obtained a very nice result without the need for a lift (at this time). Five or ten years down the line, she may be ready for a lift after her breasts have fallen more with age and gravity.

Back To Featured Breast Augmentation Before And After Photos